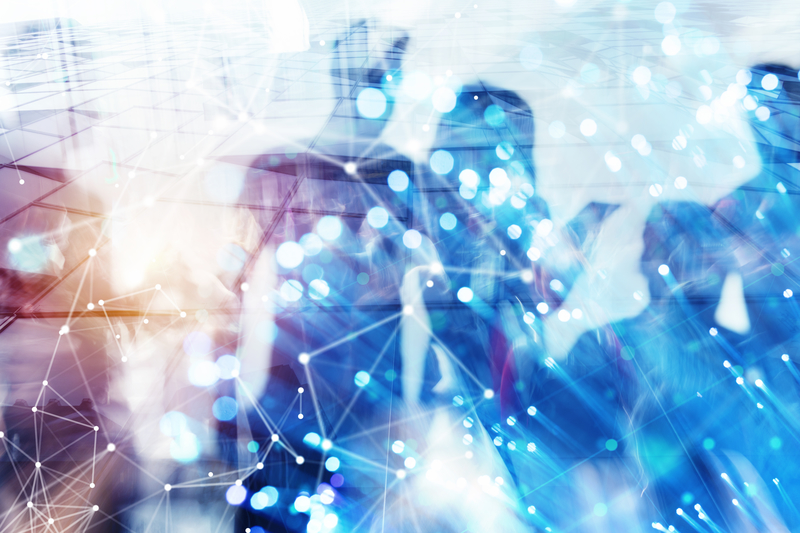 Posted at 13:08h in Amazon, Other by Phil Basford 0 Comments
91 Likes
Share

CodeArtifact is a recently announced service by AWS and it is a fully managed repository for storing your build artifacts and code dependencies.  CodeArtifact plugs a gap in the Amazon cloud native developer toolkit that I first identified last December as I was packing my bags for re:invent: 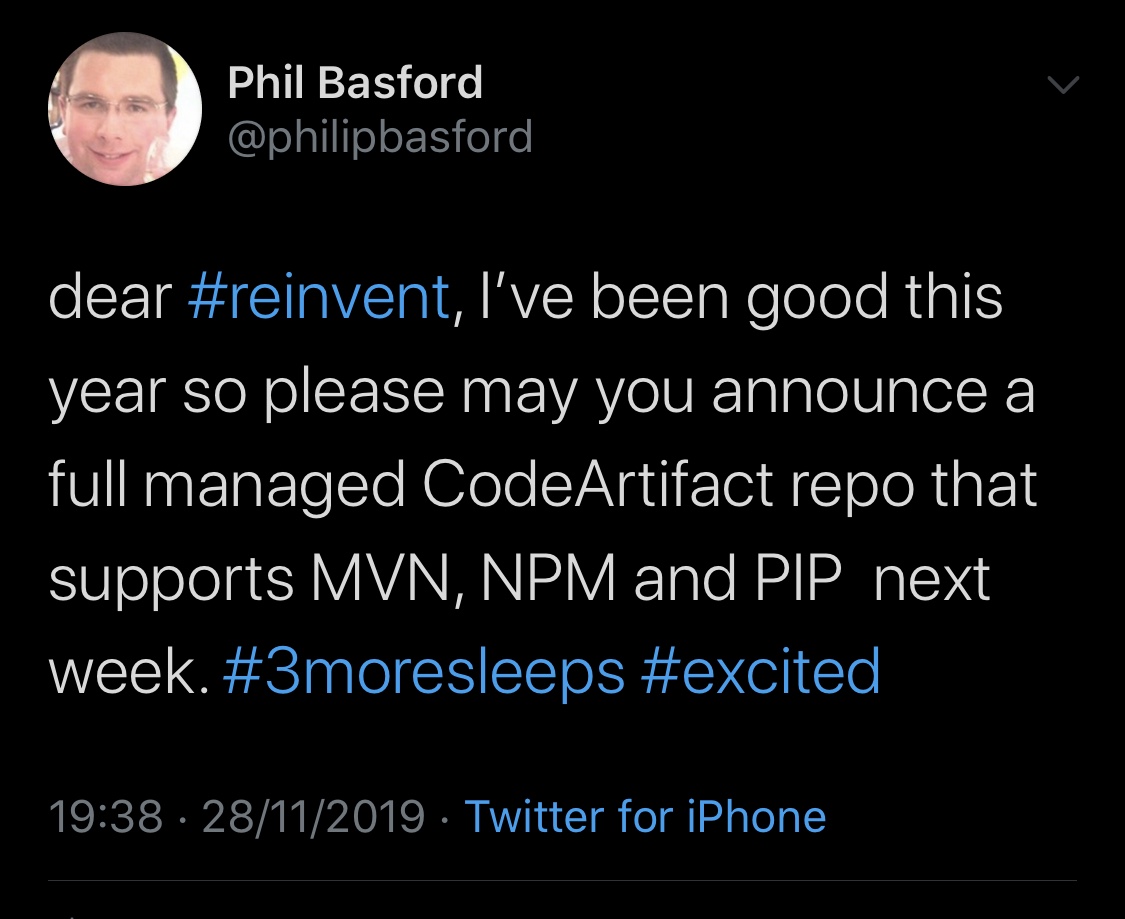 This blog will take a detailed look at the service, so please read on if you would like to know more.

During my career I have developed applications and solutions in a number of languages including Java, Node JS and Python. All of which (and lots of other languages too) allow you to load dependencies (or libraries) from repositories.  Java has Maven or Gradle, Node JS has NPM, and Python has PIP.  Dependencies are really important as they extend the core capabilities of a language and most developers reading this blog would have used at least one dependency/library. Some examples of libraries are Java (Spring), Node JS (Express), Python (Flask) and we must not forget to mention the AWS SDK. These dependencies are made available from public repositories like maven central, npm registry, and PyPi.

In addition to open source libraries most professional development teams will also create their own libraries. However, please be warned there is a whole debate on how to structure these things, my advice is to make each library as small as possible and do one thing really well. One massive library can create a monolith, even in a distributed solution. The issue with private libraries is that you do not want to share your IPR (Intellectual property rights) by publishing them to a public repository, instead you require a private repository hosted centrally in your organisation that allows you to share them.

The two private repositories I have used are Sonatype nexus and Jfrog Artifactory. Before I joined Inawisdom I spent a lot of time deploying Sonatype nexus on AWS. I created a beautiful CloudFormation script that created an ALB and EC2 instances with Sonatype nexus deployed on them, implemented routine backups to S3 of the libraries, authentication with LDAP to provide SSO, and sending logs to Cloud Watch logs. Every now and then, I would have to purge the repo of old versions of dependencies to free space or allocate more EBS storage. Rarely I would perform some maintenance to update the version of nexus, at which point we would incur an outage. All very painful and the definition of undifferentiated heavy lifting.  This meant that AWS having a fully managed private repository was high on my wish list.

Therefore, let’s give CodeArtifact a spin and see what it can do. I will focus on Python and Pip + twine, however CodeArtifact also supports Maven, Gradle, and NPM.

Creating a Repository and Domain

First, In the AWS Console go to CodeArtifact, then start by creating a repository by providing a name. Please note I recommend adding an upstream. An upstream is a proxy to a public repository. This allows you to pull seamlessly both public and private dependencies. 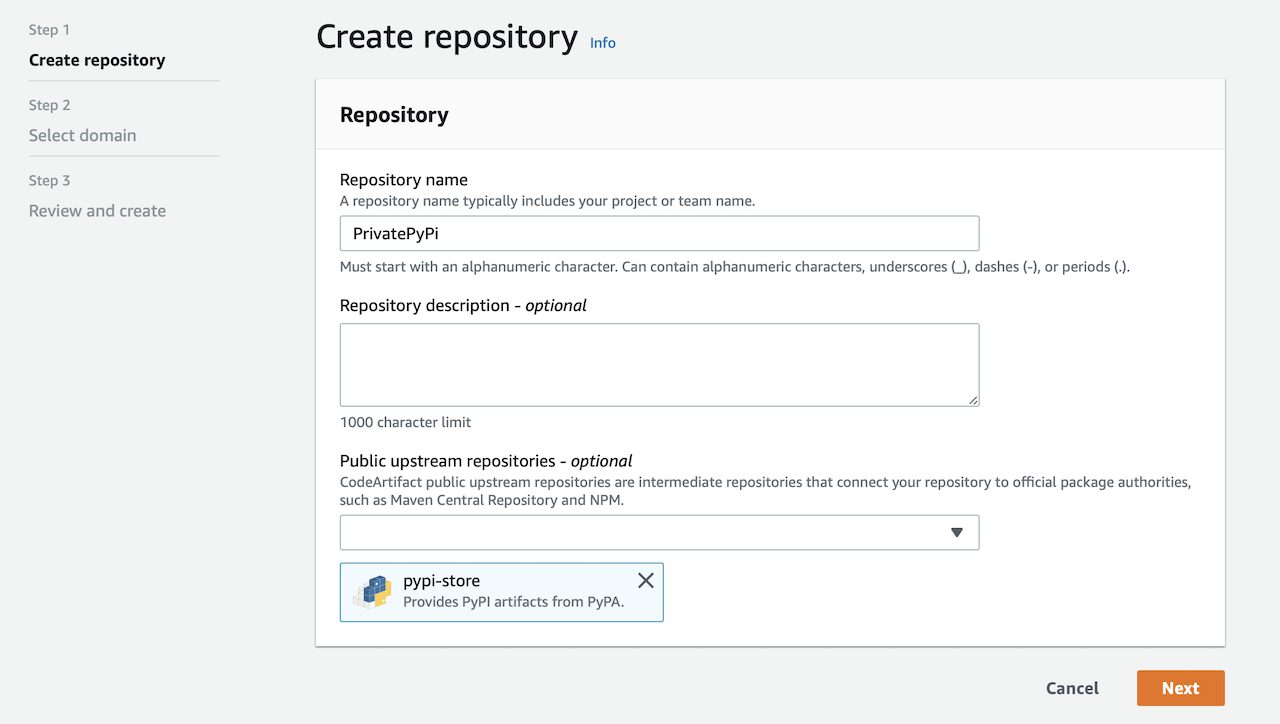 Next you have to create a new, or select an existing, domain. Domains are where your private libraries are actually stored and are useful in organisations; you can create your domain in a central shared services account and then a repository in each development account. This means each development team can pull dependencies published from other development teams when using different accounts. 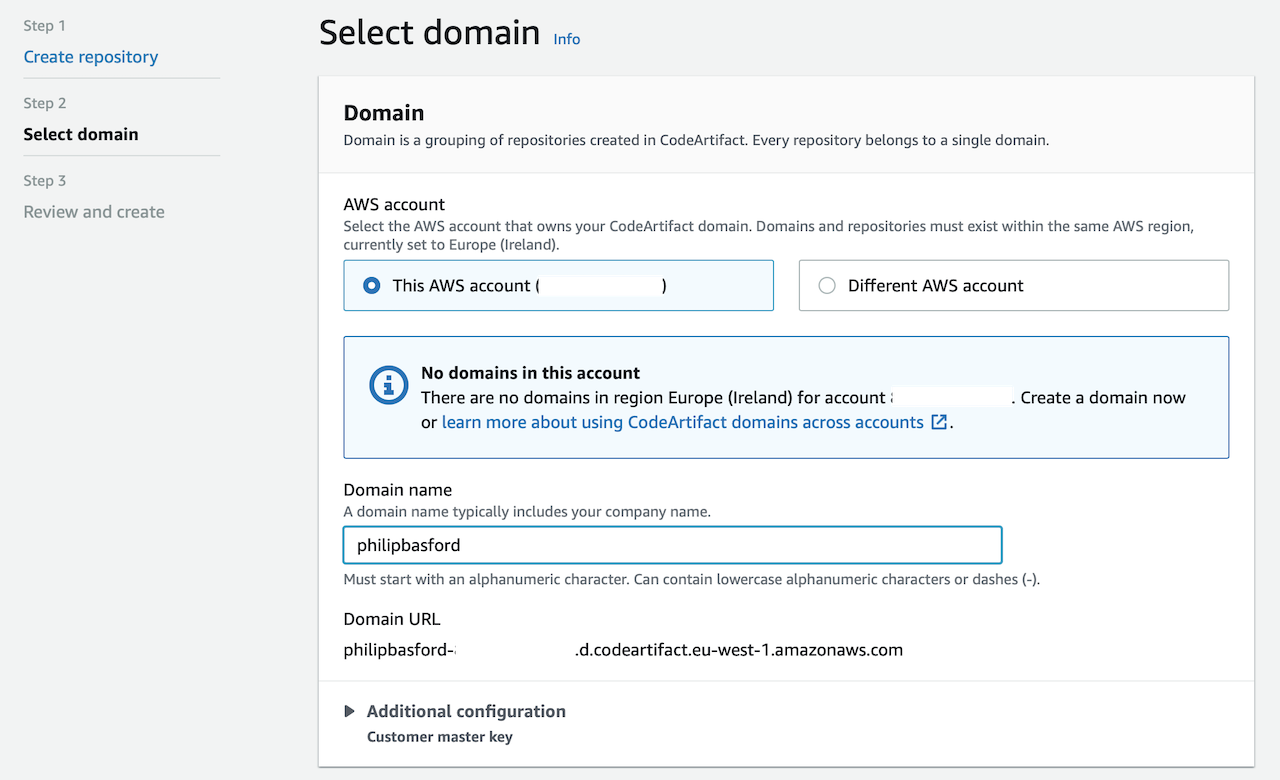 To complete the creation your need to review and approve it: 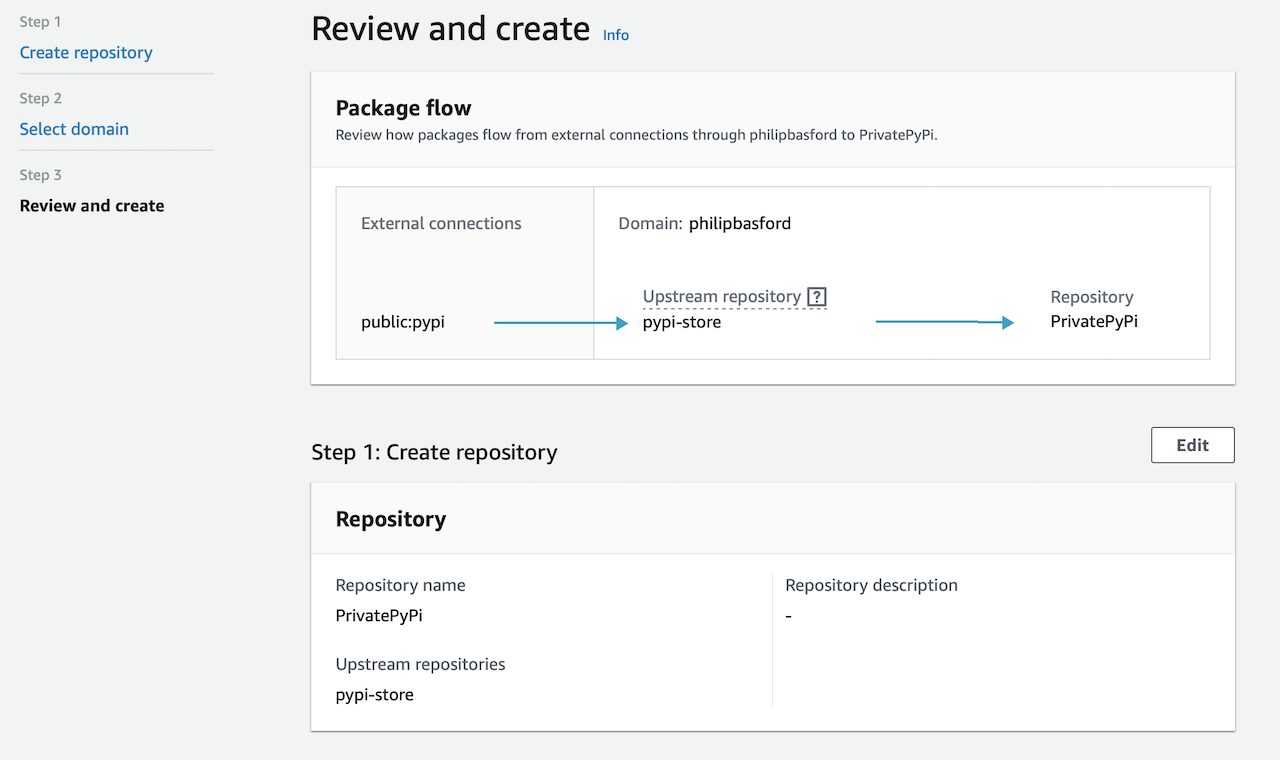 Once created you will see something similar to this:

So, let’s see if the repository and that upstream works by trying to pull pandas using pip:

As we are using Python we will need to use twine to push our private dependency, you will have to create and run your setup.py and the publish it:

Finally, by refreshing and digging into the console, we can confirm the private library is uploaded and shows us the details: 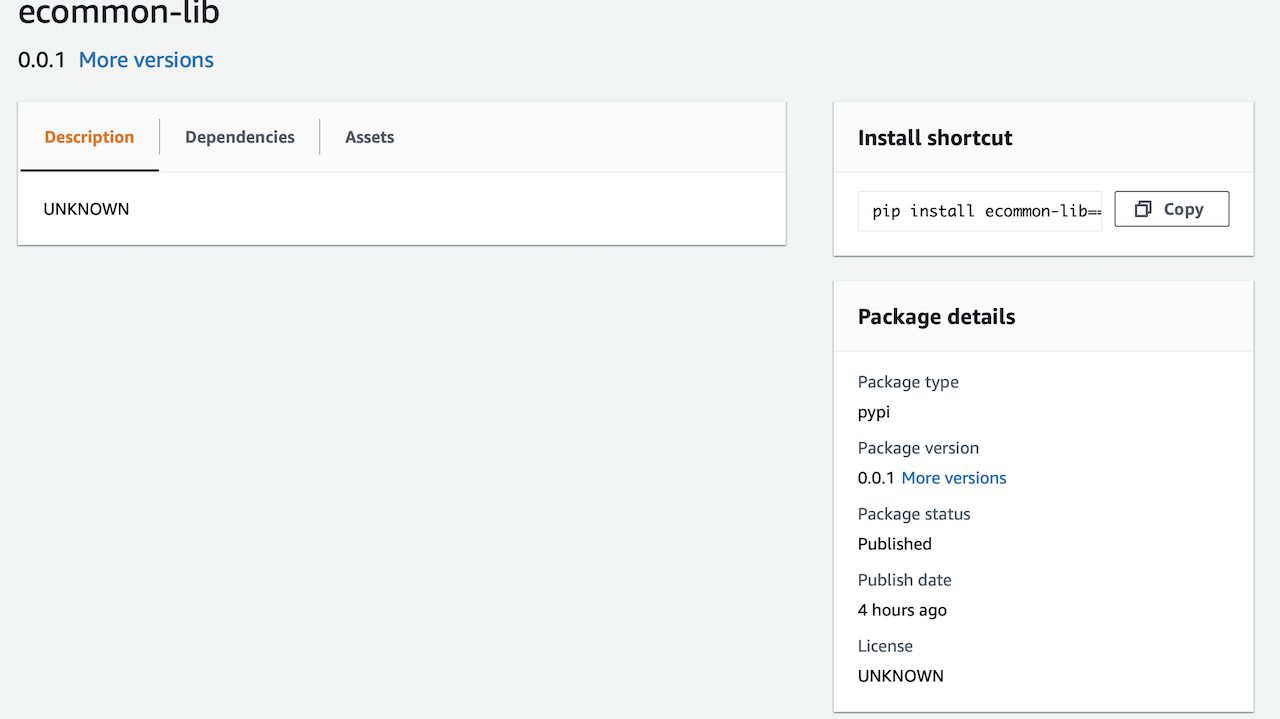 The following are some features I would like to be added to CodeArtifact that I identified from my initial exploring:

CodeArtifact removes the undifferentiated heavy lifting of running your own private repository and for that it is very good and trouble free. However, there are two other wider implications of CodeArtifact:

This is all good, therefore if you are developer on AWS I encourage you to adopt CodeArtifact today. If you’re an architect I challenge you to simplify your architectures and remove them NATs. Happy coding!