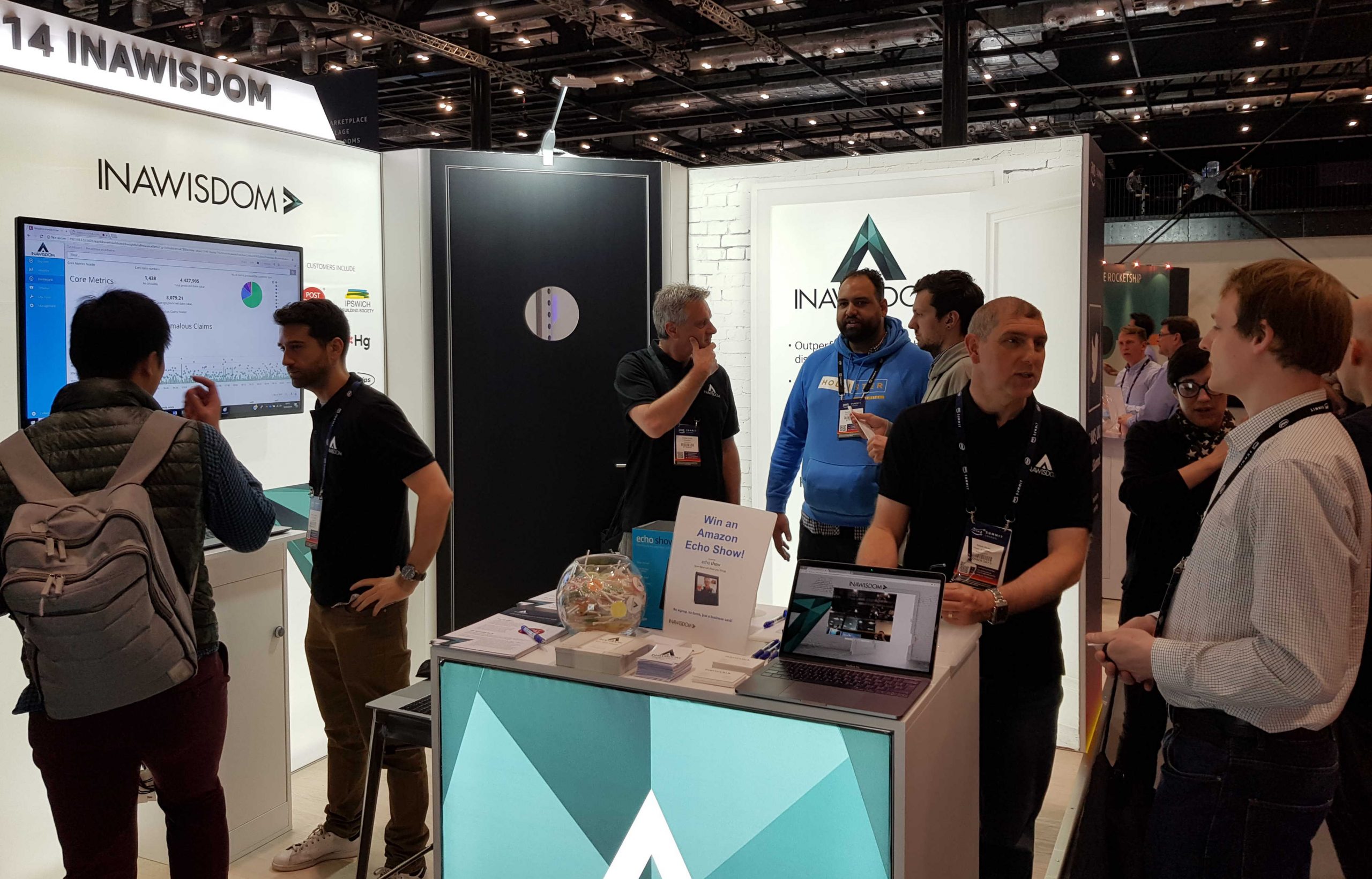 17 May AWS Summit London – Reflections from the Front-line

We sponsored a stand at the AWS Summit event in London recently. These are a few of my personal thoughts on the day, after spending 12 hours on my feet meeting lots of really interesting people and hearing about their journey to the Cloud. The demos also produced a few interesting Machine Learning and AI-related experiences.

Manning the Stand at the AWS Summit

This was the first AWS Summit in several years for me (I’ve been busy delivering stuff) and the first time I’ve manned a stand. It was obvious that the levels of excitement, the feeling of being at the leading edge, still pervades an Amazon Web Services event. There were big crowds in the Excel Arena so it was a busy day for us all.

Many of the 12,000 attendees who came to visit our Inawisdom stand helped train our real-time imaging demo (which you can just about see in the photo above). The exercise was designed to derive the emotion of visitors to our stand from other characteristics. The demo was based on AWS Rekognition, one of the flagship Artificial Intelligence and Machine Learning services offered on AWS. It generated a lot of fun as it learnt to gauge the age-range and other factors of the people looking into our webcam in order to suggest what their emotion was. Not surprisingly perhaps, “HAPPY” won the day, over “CONFUSED” and other possibilities.

It was great to hear the diverse range of real-world business problems that could lend themselves to solutions based on Data Science and Machine Learning. If you want to hear about the Keynote by Werner Vogels, where he announced the new Machine Learning AWS Competency, then there are Youtube channels with that and all the main presentations. In an earlier blogpost we wrote about the anticipation of the Summit, the Keynote and our piece of history as a Machine Learning Competency Launch Partner (one of only two in the UK!)

One of our other demos monitored Tweets from Twitter with the #AWSSummit hashtag, using natural language sentiment analysis and machine learning. There was a very high level of positivity about the event all day but what the sentiment analysis picked up in real-time were three noticeable “dips” highlighted in the image below.

This nicely shows the value of a bit of (relatively simple in ML terms) analysis as the causes of these three dips were quickly identified from a perusal of tweets to be:

a) a temporary problem with the registration system checking tickets on entry around the 8:30 mark, and

The negative word cloud, which comes from our visualisation, included “queue”, “registration” and “broken” when focussing on that morning trough. The volume of retweets (the pink peak below) was significant in this short period, indicating a general consensus.

Further quick analysis of the “Dip”

The other demos that attracted a lot of interest, especially from the many financial services companies who spoke to us, were the ones using a real-time stream-based Anomaly Detection machine learning service. The visualisation aspect of highlighting potential anomalies, shown as little blue circles on the screen image below, along with the amount of potential fraud involved, indicated by the height, can really help to focus attention within your customer service on predicting customer queries before they happen. Improving Customer Service is a growing area of focus for predictive analytics. This is likely to be as important as detecting anomalies in the more traditional areas of insurance and loan/mortgage applications, where anomaly detection can be plugged into existing processes. This technique is already used by a lot of customers.

Plenty of Interest at AWS Summit

As everyone knows, attending an AWS Summit is the best way to rub shoulders with the experts and learn an awful lot of very useful information. However, it is also a chance to gather lots of “swag” and we were no exception. By the end of the day we had completely run out of the nice branded gym bags which were in high demand.  There was also a run on laptop stickers. We did, however, find a whole stash of left-over lollipops 🙂 maybe we’ll be using those at the next event.

It was great to meet so many customers, old friends, ex-colleagues and AWS partners as well as the many business and technical people who came to say hello and discuss their potential Machine Learning opportunities. Thank you and we hope to see you again soon.