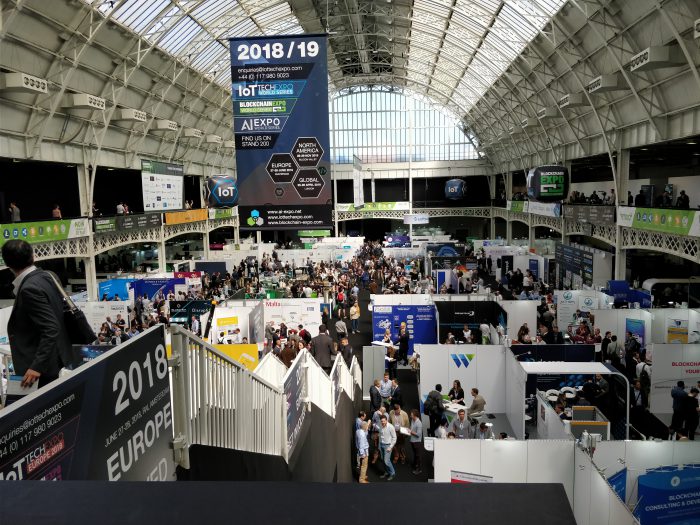 IoT and AI together in one Expo

I recently attended my first IoT Tech event in London Olympia, mainly for the AI and Analytics Expo which ran alongside to make the connection. Inawisdom is working on a customer project that is polling and analysing data from IoT “things” in near real time and as we are using AWS IoT services it was useful to get some perspective on the current state of the art and companies active in this area.

The event ran concurrently with a Blockchain Tech Expo and I quickly realised that more than three-quarters of the conference was focussed on Blockchain rather than AI or IoT.

In fact, AI was quite a small part but here are my thoughts and observations.

Let’s start with my favourite presentation of the day by Benfica FC.  This was about using IoT to collect data from footballers for analysis. Being a devotee of Arsenal and a keen Fantasy Football participant I found it fascinating the amount of analysis that clubs do. They still cannot explain Arsenal’s terrible away form though :). There were a lot of questions about ownership of data, whether players or clubs share data and whether they share techniques. A Newcastle Utd analyst was on a panel with the Benfica experts and is doing a PhD on the whole subject of analytics in football so it is a high-profile use of analytics.

Perhaps the most interesting questions were about training the machine learning jobs and evaluating their efficacy. As someone pointed out there is a massive difference between footballers and their role. Lionel Messi and Virgil van Dijk for example have massive influence on their team merely by their presence and raise the whole team’s game.

There are other environmental variables so just logging the distance run, number of touches, key passes, tackles, etc only tells half the story. How can you “learn” what causes a player to get injured without driving them to get injured? Managers like Arsene Wenger draw criticism when they “rest” a player but maybe the stats are saying he is in “the red zone” (anyone who plays FIFA will get that reference). The type of injury also needs to be taken into account and rarities must, by their nature, be almost impossible to predict. A final question was how the success of the investment in technical analysis is measured, to which the reply was “when the team win”.

I could write all day about football but there were other interesting AI-related stands in the exhibition.

Sense was a theme

See Sense was a product I liked as I’m a keen cyclist, often around London or pot-holed Suffolk/Essex roads. They have an IoT bike light that collects and uploads data via Bluetooth phone to a central server where it is analysed and registered cyclists can learn about “pot-hole blackspots”, good cycle paths and more from the aggregated geo-logged data.

I also said hello to my old friends Jag and Nick from Sensing Feeling. They have invented a device that scans a room of faces and has been trained to recognise the general mood (smile, frown, etc). This is not novel in itself but what SensingFeeling do is apply data protection and aggregate analysis so that personal data is never retained and the device itself comes with a friendly smiley on it. Jag explained it much better at another recent event in the “Tick Bird and Rhino” series of meetings, which bring together Technology and Art people for mutual interest (www.tickbirdandrhino.com).

On the IoT side of things (no pun intended) the maturity of Cloud management and data collection services has led to a few aggregators appearing who provide software that can run in conjunction with a device’s software to provide connectivity to any of the clouds (AWS, Google, Azure and IBM’s Bluemix). This is an interesting alternative if you didn’t want to tie yourself to something like AWS Greengrass which is currently available in the EU-West-2 Frankfurt region (but not yet in London or Ireland). One company (Zerynth) has python client code which provides that agnostic layer between “Things” and Cloud Services.

On the AI side there were self-driving cars and tech to drive them which were interesting to see and play with. Also, quite a lot of security-related stands addressing the perceived issues with IoT and data collection in the light of new GDPR regulations. Another company was combining all the angles with a blockchain-based supply chain process to mark products like high-end brand trainers and track their progress and presumably whether they end up in a Charity Shop. There was also a company analysing video in real-time which was interesting and slightly sinister.

All-in-all I’m personally warming to Internet of Things as it matures to provide some useful products and its potential in combination with back-end analytics and ML is something I’ll be looking at with interest but it still feels like a niche area, struggling to justify some of the hype as noted by Robin in an earlier IoT-focused blog post.